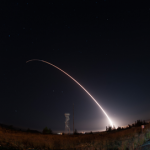 The NPR says the U.S. would only consider the deployment of nuclear weapons in the event of “significant non-nuclear strategic attacks” and other “extreme circumstances,” Shanahan said at a Pentagon press briefing with Deputy Energy Secretary Dan Brouillette and Thomas Shannon, undersecretary for political affairs at the State Department.

The document seeks to modernize the command-and-control system and the nuclear triad’s components that include submarine-launched ballistic missiles, ground-based intercontinental ballistic missiles and nuclear-based aircraft.

The U.S. has begun the Ground-Based Strategic Deterrent program that seeks to replace Minuteman III missiles by 2029 and update 450 ICBM launch facilities to support the deployment of 400 ICBMs, according to the review.

The country has started an initiative to build and field the B-21 Raider bomber aircraft by mid-2020s as a replacement for the U.S. military’s B-2A Spirit and B-52H Stratofortress bombers.