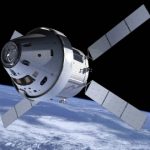 NASA has announced that the Orion spacecraft’s fifth parachute test will take place Dec. 13 at the U.S. Army‘s Yuma Proving Ground in Arizona.

The space agency said Tuesday a C-17 aircraft will drop a model Orion vehicle from an altitude of 35,000 feet as engineers will assess a simulated scenario wherein one of the spacecraft’s three main parachutes does not open.

Orion parachutes are designed to decelerate the spacecraft from 300 miles per hour to 20 mph in a span of 10 minutes.

The test is part of a series of eight that are done to evaluate and ensure the safety of using the spacecraft for future crewed missions, NASA noted.

Orion is a multipurpose spacecraft designed for deep space exploration missions such as those involving asteroids, the moon’s vicinity and Mars.

NASA aims to launch the spacecraft aboard the Space Launch System for missions the agency expects to begin in 2019.