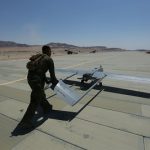 The Marine Corps said Wednesday the RQ-7B Shadow UAS, which has been in service for more than five years, will be phased out and succeeded by the RQ-21A Blackjack system.

The annual Steel Knight exercise showcases the combined capacities of air and ground assets which will demonstrate various military strategies for ground fires, command and control as well as maneuver warfare tactics.