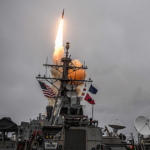 The U.S. Navy and naval forces from seven other NATO member countries have engaged in an integrated air and missile defense scenario Saturday as part of the Formidable Shield 2017 exercise.

The exercise brings together more than 14 ships, approximately 3,300 personnel and 10 aircraft platforms from the aforementioned countries, as well as Belgium, Denmark and France to participate in exercises on the U.K. defense ministry’s Hebrides Range in Scotland.