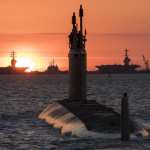 The U.S. Navy will hold a commissioning ceremony on Oct. 7 for the USS Washington fast attack submarine that Huntington Ingalls Industries‘ Newport News Shipbuilding company delivered in May.

Construction began in 2011 for the submarine dubbed SSN 787, which is the 14th Virginia-class nuclear submarine and the fourth in its class under Block III.

Newport News turned over the ship to the Navy in May after the submarine passed the Board of Inspection and Survey sea trials.