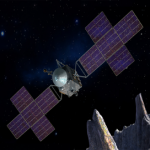 NASA has moved from 2023 to the summer of 2022 the launch of a robotic space mission that seeks to explore a metal asteroid called 16 Psyche and investigate its formation and surface.

The change in schedule will make the launch of the Psyche mission a year earlier than planned and advance the arrival of the spacecraft at the asteroid by four years, the Jet Propulsion Laboratory said Wednesday.

Psyche is one of the two robotic missions that NASA selected in January through the agency’s Discovery Program.

Jim Green, director of the planetary science division at NASA, said the earlier launch of the Psyche mission seeks to help NASA “fulfill our science objectives sooner and at a reduced cost.”

Space Systems Loral currently develops the spacecraft under a potential $75 million contract that NASA awarded in January and has expanded the space vehicle’s solar array system to support the revised trajectory.

“By increasing the size of the solar arrays, the spacecraft will have the power it needs to support the higher velocity requirements of the updated mission,” said Steve Scott, Psyche program manager at SSL.

Lindy Elkins-Tanton of Arizona State University will serve as the principal investigator on the Psyche mission.

The spacecraft will integrate a gamma ray, neutron spectrometer, multispectral imagers and magnetometers as instrument payloads.