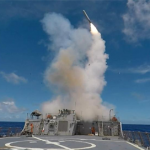 The Tomahawk Weapons System Program Office, designated as PMA-280, updated the Tactical Tomahawk Weapons Control System‘s processors and software in an effort to avoid hardware obsolescence as well as secure and simplify the user interface of the system, the Navy said Tuesday.

TTWCS is designed to retarget and redirect missiles in flight and compute missile routes to direct units towards its intended target to offer offensive strike firepower for the Navy’s combatant ships .

The Navy noted that it will also incorporate TTWCS hardware upgrades on the branch’s ships and nuclear powered cruise missile submarines.