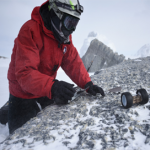 NASA has developed an origami-inspired robot designed to fold itself and explore rugged areas deemed “too risky” for rovers.

The agency said Tuesday the Pop-Up Flat Folding Explorer Robot has been tested in various terrains such as the Mojave Desert in California, a ski resort in Colorado and an active volcano in Antartica.

The solar-powered PUFFER robot works to fold its two wheels over the main body to crawl into spaces where rovers cannot fit, NASA added.

PUFFER’s developers at the Jet Propulsion Laboratory aim to launch the robot for planetary expeditions such as the Mars mission.

“If Curiosity had a stack of PUFFERs on board, each of them could go to separate spots, and the rover would just go to the most interesting one,” said Kalind Carpenter, a robotics engineer at JPL.

JPL scientists look to add various instruments into PUFFER which could allow the robot to sample water for organic material as well as study the chemical composition of its environment.

PUFFER could also become as large as a breadbox and feature smart technology such as autonomy, NASA said.