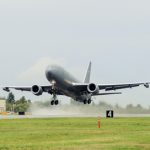 The Government Accountability Office has found that the U.S. Air Force’s $44 billion tanker modernization program that aims to replace a third of the service branch’s KC-135 aerial refueling planes with Boeing-built KC-46 aircraft has met performance and cost targets due to few changes in engineering requirements.

The decline in the total acquisition cost estimate represents a 14 percent, or approximately $7.3 billion, reduction since the initial 2011 estimate.

The report also showed a 14-month delay in the delivery of the first 18 KC-46 tanker planes.

Boeing was originally scheduled to hand over 18 KC-46s and nine wing air refueling pods to the Air Force by August 2017, but was allowed to move the delivery of the assets to October 2018 due to delays in flight tests and ongoing certification process under the Federal Aviation Administration.

The company must need to complete an average of at least 1,700 testing phases for each month between February and September 2017, the congressional budget watchdog added.