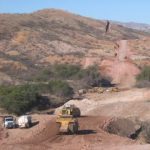 An internal report from the Department of Homeland Security says President Donald Trump’s plan to build a wall along the U.S.-Mexico border would cost up to $21.6 billion and take more than three years to complete, Reuters reported Thursday.

The proposed construction effort would occur in three phases through 2020 to build a 1,250-mile stretch of fences and walls that would extend the current 654-mile border with Mexico, Ainsley reported.

The report assumes Congress will provide funds by April or May, which aims to allow DHS to find contractors and start construction in September, Reuters stated.

The document also revealed that the U.S. government has begun to coordinate with existing contractors, plan for steel purchases and seek waivers for environmental laws.