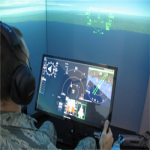 Autonomous agents are equipped with a “Goal Reasoning” system that operates each unit to self-select and pursue mission objectives.

“The main idea here is if the UAV/wingman is left to its own devices, it has the ability to recognize when or how to change its goal or objective as the mission scenario unfolds,” said David Aha, head of the adaptive systems section at  NCARAI.

“While some systems allow users to insert new goals or pre-program the selection of new goals, goal reasoning agents can dynamically select new goals to pursue that are not pre-programmed,” Aha added.