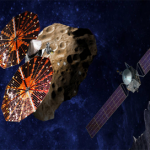 NASA has unveiled two missions that seek to explore the history of the solar system through the use of robotic spacecraft to study asteroids.

NASA will launch the Lucy mission in October 2021 in order to study Jupiter’s six Trojan asteroids and one main belt asteroid between 2025 and 2033.

“Because the Trojans are remnants of the primordial material that formed the outer planets, they hold vital clues to deciphering the history of the solar system,” said Harold Levison, principal investigator of the Lucy mission from Southwest Research Institute.

Lockheed Martin will build the Lucy spacecraft, while NASA’s Goddard Space Flight Center in Maryland will provide systems engineering, mission assurance and management support for the mission to be led by SwRI.

NASA also plans to launch the Psyche robotic mission in October 2023 to explore a giant metal asteroid called 16 Psyche as well as understand how the planets divided into core, crust and mantle layers.

Lindy Elkins-Tanton of Arizona State University will serve as the principal investigator on the Psyche mission.

NASA expects the Psyche spacecraft to reach the metal asteroid in 2030 once it completes the Earth gravity and Mars fly-bys in 2024 and 2025.

NASA will also extend for another year financial support for the Near Earth Object Camera project that involves the use of a space telescope to survey space regions near the Earth’s orbit.