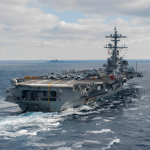 The U.S. Navy said Thursday the deployment is part of a regular troop rotation that seeks to support crisis response, maritime security and theater security cooperation efforts as well as advance naval presence in both 5th and 6th fleet areas.

The service branch noted that CVW-8’s nine squadrons that include VFA-31 “Tomcatters” and VFA 213 “Fighting Black Lions” will leave several bases such as the Naval Air Station Jacksonville in Florida and NAS Oceana in Virginia.