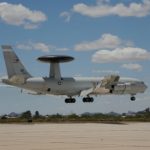 Andrew Chuter writes the airborne warning-and-control system aircraft could return to service in January if the unit performs well during the tests.

“This work continues and a return to the normal level of aircraft availability is forecast early in 2017,” the Royal Air Force said.

The U.K’s E-3D fleet ceased operations in October after the service branch discovered electrical wiring and cabin conditioning problems, according to the report.