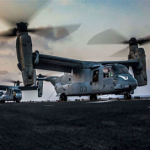 The U.S. Navy and Marine Corps have completed a joint exercise with a nighttime helo-borne raid to demonstrate both military branches’ capabilities to conduct a raid on a simulated enemy communications node.

“The training we executed during Alligator Dagger sharpened our skills and displayed the range of combat, sustainment and crisis-response capabilities the ARG-MEU team brings to the region,” said Capt. Mike Crary, commander of Amphibious Squadron Five.

The 11th MEU is comprised of a ground combat element, Battalion Landing Team 1st Battalion of 4th Marines, an aviation combat element within the Marine Medium Tiltrotor Squadron 163, a combat logistics element under the Combat Logistics Battalion 11 and a command element with a commanding officer.