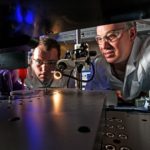 The Department of the Navy has begun its search for naval officers, Marines and other service personnel who have developed novel platforms and capabilities in support of the military branch’s missions as part of the 2016 Secretary of the Navy Innovation Awards.

“I want the entire workforce, from the most senior admirals, generals and civilian executives to recruits and officer candidates, to look for ways to improve their organizations and accomplish their missions,” Navy Secretary Ray Mabus said.

The Navy will accept nominations through Dec. 31 and announce the winners in March.