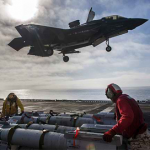 The team also performed ordnance separation and live-fire tests as well as evaluation of the takeoff and landing worst-case scenarios and endpoints.

“We’re here to augment the existing weight center of gravity effects of the aircraft to expand the fleet envelope wind over deck, and different lateral symmetry and asymmetry configurations,” said Gabriella Spehn, an F-35 weapons engineer at the Pax River ITF.

“The only way to increase the endpoints is to test on board a ship for sink rates and high sea states, which is the next phase of testing after land-based testing is complete,” Spehn added.

Pilots performed the tests under various environmental conditions to assess the aircraft’s limitations and capabilities, according to the Navy.