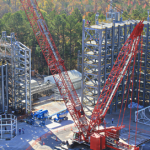 NASA has set up a test version of an interim cryogenic propulsion stage with a stand at the space agency’s Huntsville, Alabama-based Marshall Space Flight Center in preparation for the hardware’s tests.

The ICPS was developed based on liquid oxygen and liquid hydrogen as a hardware components for the Space Launch System rocket and is designed to boost the Orion spacecraft during spaceflight in 2018, NASA said Friday.

NASA will stack the ICPS with three other test items and two simulators that compose SLS’ upper portion before the test series with 50 cases begins in early 2017.

“The installation of the ICPS is another big step in getting ready for the test series, which will ensure that the hardware can endure the incredible stresses of launch,” said Steve Creech, deputy manager of the spacecraft and payload integration and evolution office at Marshall.

“In addition to testing, work is underway on flight pieces of the upper part of the rocket, including the ICPS,” added Creech.

Boeing and its United Launch Alliance joint venture with Lockheed Martin designed and built the ICPS hardware, which measures 29 feet tall and 16.8 feet in diameter without the engine.

The ICPS sits alongside other hardware pieces already installed in the Marshall stand such as the core stage simulator and the launch vehicle stage adapter.