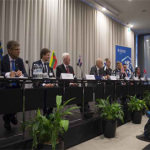 The U.S. and Nordic and Baltic nations have conducted multilateral security meetings in Finland over two days to address regional security threats and beef up the U.S.-Nordic-Baltic cooperation, DoD News reported Friday.

The report said Work also inked a statement of intent with Finnish Defense Minister Jussi Niinisto to bolster collaboration on defense issues between the U.S. and Finland.

“It expresses our shared desire to cooperate on security issues of mutual concern and to ensure that our militaries can work together to confront [those issues],” the U.S. deputy defense secretary said.

Ferdinando writes discussions during the overall meeting covered regional security concerns such as the Islamic State militant group and Russia’s behavior in the Baltic Sea, including that country’s reported breaches into the airspace in Finland and Estonia.