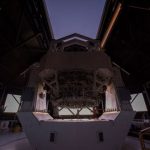 An article published Tuesday on ExecutiveGov says the Air Force Space Command will jointly operate the optical telescope with the Australian government through the Harold E. Holt Naval Communication Station in Western Australia.

SST is built to detect and track “debris and satellites about 36,000 kilometers above the Earth,” Lindsay Millard, program manager for SST at DARPA, said at the event.

“Before SST, no single telescope could handle both of these challenges: seeing things that are very small, very faint, and very far away, simultaneously over an enormously vast area,” Millard added.