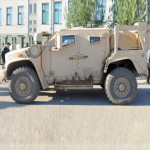 The U.S. Army plans to deploy the Light Combat All-Terrain Vehicle in 2019 as a replacement for the Humvee, the Army said Thursday.

L-ATV is designed to be transported by helicopter and works to carry up to 15,639 pounds of cargo.

“We wanted to develop a truck with better underbody protection, and load protection, but one that could still put 3,500 pounds of payload in it,” said Col. Shane Fulmer, product manager systems integration for the Joint Program Office.

“This vehicle fits the bill,” Fulmer said of L-ATV.

Paratroopers from the 2nd battalion under the 173rd airborne brigade’s 503rd infantry regiment inspected Tuesday an L-ATV that was en route to Lithuania for testing, the report said.