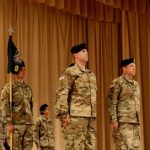 “There was no question Maj. Jack Bierce and 1st Sgt. Wade Parker are the absolute right team to stand up this organization, and I know they will do an amazing job,” said Shrank.