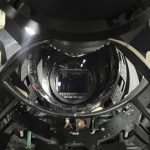 The Defense Advanced Research Projects Agency is scheduled to hand over to the U.S. Air Force a telescope that works to track space debris and detect potential asteroid and satellite collisions in deep space, DoD News reported Monday.

Cheryl Pellerin writes the Air Force Space Command will assume ownership of the Space Surveillance Telescope from DARPA at an event to be held Tuesday at White Sands Missile Range in New Mexico.

The Air Force Space Command will jointly operate SST with the Australian government through Harold E. Holt Naval Communication Station in Western Australia and integrate the telescope with the U.S. Space Surveillance Network to serve as a sensor, Pellerin reports.

According to DARPA, NASA used SST to perform approximately 7.2 million asteroid observations in 2015 as well as identify 3,600 new asteroids and 69 near-Earth objects.

The space telescope has a curved telescope mirror that adopts the Mersenne-Schmidt design and a camera with a curved charge-coupled device for use in image collection, according to the report.