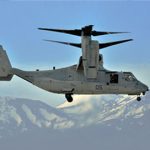 The demonstration marks the first time a U.S. Navy-owned aircraft flew with a safety critical component that was built through the additive manufacturing process, NAVAIR said Friday.

“The flight today is a great first step toward using AM wherever and whenever we need to. It will revolutionize how we repair our aircraft and develop and field new capabilities,” said Liz McMichael, NAVAIR’s additive manufacturing integrated product team lead.

Prior to the demonstration event, NAWCAD and Penn State Applied Research Laboratory collaborated to build  multiple V-22 components and the subsystems were tested at the Patuxent River facility.

“We’ll be working with V-22 to go from this first flight demonstration to a formal configuration change to use these parts on any V-22 aircraft,” McMichael added.

NAVAIR noted her team has identified an additional six flight critical parts the group aims to produce and assess  over the next year for integration into the V-22, H-1 and CH-53K rotocraft platforms owned by the U.S. Marine Corps.