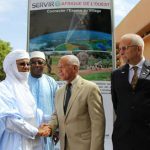 The U.S. Agency for International Development and NASA have launched SERVIR-West Africa, an environmental monitoring program in Niamey, Niger, that will work to address the climate-sensitive issues of the region through space-based observations.

NASA said Thursday the SERVIR center will support scientists and decision-makers who utilize space data to manage issues related to the climate, such as food security and water resources.

The agency added that SERVIR-West Africa scientists will have access to space-based climate, weather and other data from NASA’s satellites to support policymakers, government agencies and stakeholders across Burkina Faso, Ghana, Niger and Senegal.

Alex Deprez, USAID West Africa regional office director, said the center will assist collaborations between scientists to aid the region against the challenges it faces.

SERVIR-West Africa will be implemented by a unit of the Permanent Inter-State Committee for Drought Control in the Sahel and supported by Tetra Tech and partners in West Africa.

“Together with USAID, we are continuing the effort to bring space-based science down to Earth for real-time, real-world uses that are changing people’s lives where they live,” he added.