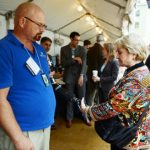 The Army said Wednesday Johnny Matheny — the research program’s test patient who lost his left arm to cancer — underwent procedures so he could use the remaining muscles and nerves of his left arm to control the prosthetics.

Matheny also went through an osseointegration process, where a metal device was surgically implanted into his bone to remove the need for a fiberglass cup and straps that are commonly used with most prosthetic arms, DARPA added.

Matheny the DARPA Demo Day the battery-operated robotic arm helps him carry up to 45 pounds.

The planned system will work to facilitate a two-way signal transmission between the brain implants and prosthetic sensors so users can also experience sensation, Sanchez said.