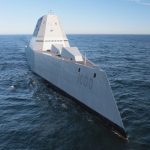 Sam LaGrone writes the Navy has asked for the $450 million in additional funds to complete the Zumwalt, Michael Monsoor and Lyndon B. Johnson ships.

USNI News reports the cost increase is folded into the Navy’s new three-year projection of $22.5 billion for the Zumwalt class through fiscal 2017, according to the report.