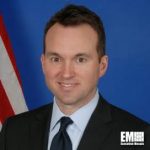 Eric Fanning is set to resign as acting Army secretary while the Senate Armed Services Committee has yet to hold a confirmation hearing for his nomination to the post, Defense News reported Monday.

Aaron Mehta and Joe Gould write that Fanning was nominated to succeed John McHugh, who departed his post in November.

Pentagon Press Secretary Peter Cook said members of the Senate Armed Services Committee are concerned about the acting role given to Fanning, according to the report.

Army Undersecretary Patrick Murphy has been appointed as interim secretary of the department, Defense News reports.