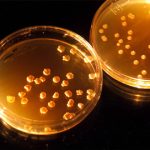 The National Institute of Standards and Technology has collaborated with several universities to test a quantum mechanical concept that states that two particles can remain correlated in their physical state even when they are in different locations.

NIST said Tuesday the research team aimed to demonstrate entanglement, or “actions at a distance,” theory through a Bell experiment using single-photon detectors built by the agency and NASA‘s Jet Propulsion Laboratory.

During the study, researchers addressed fair sampling, light-speed communication and freedom of choice loopholes that were prevalent in previous Bell’s inequality experiments, according to the agency.

“Our results agree with what quantum mechanics predicts about the spooky actions shared by entangled particles,” Shalm added.

The University of Illinois and the Universities of Waterloo and Moncton in Canada worked with NIST to create the photon source used in the study, while the Barcelona Institute of Science and Technology helped develop a random number generator.

The NIST-led research team conducted the experiment at the agency’s facility in Boulder, Colorado.