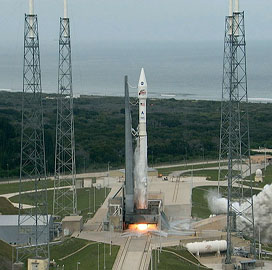 NASA has launched a Lockheed Martin-built spacecraft into space for an exploration program aimed at investigating the atmosphere of planet Mars.

The Mars Atmosphere and Volatile Evolution spacecraft will work to examine Mars’ atmospheric loss rates in order to help scientists figure out how that planet lost its water and turned dry, NASA said Monday.

“MAVEN joins our orbiters and rovers already at Mars to explore yet another facet of the Red Planet and prepare for human missions there by the 2030s,” said Charles Bolden, NASA administrator.

Bolden added that the mission is part of a program to probe the solar system and reach other space destinations.

MAVEN will travel for 10 months before reaching Mars, where MAVEN will fire six thrusters into the planet’s orbit and perform science investigations five weeks after the firing.