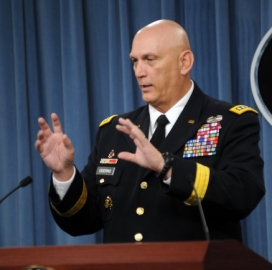 Sydney Freedberg writes that Odierno told an audience at an American Enterprise Institute event on Monday that the Pentagon recommended a 1 percent pay raise for active-duty service members and the House proposed a 1.8 percent military pay increase.

“That sounds like a little difference; but it’s a huge difference throughout the years,” Odierno said, adding that “it’s billions of dollars.”

He added the branch spends 46 percent of its budget on pay and benefits and expects pay allocation to reach 80 percent if compensation growth continues in the next decade.

The Army has cancelled drills for 78 percent of its brigade combat teams because of sequestration, the report says.

“We’re trying to work with Congress on this, but if we continue to have higher-level pay raises it’s going to become really a problem for us,” Odierno told interlocutor MacKenzie Eaglen during Monday’s event.