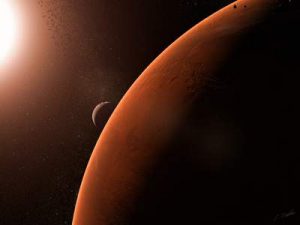 NASA and Microsoft Research are bringing Mars to life with new features in the WorldWide Telescope software that gives viewers a high-resolution 3-D map of the Red Planet.

“By providing the Mars dataset to the public on the WorldWide Telescope platform, we are enabling a whole new audience to experience the thrill of space,” said Chris C. Kemp, chief technology officer for information technology at NASA Headquarters in Washington.

Viewers will be able to virtually explore Mars and make their own scientific discoveries. New features include the highest-resolution, fully interactive map of Mars ever created, realistic 3-D renderings of the surface of the planet and video tours with two NASA scientists, one of which will address the question “Is there life on Mars?”

“Our hope is that this inspires the next generation of explorers to continue the scientific discovery process,” said Ames Center Director S. Pete Worden.

“These incredibly detailed maps will enable the public to better experience and explore Mars,” said Michael Broxton, a research scientist in the Intelligent Robotics Group at Ames. “The collaborative relationship between NASA and Microsoft Research was instrumental for creating the software that brings these new Mars images into people’s hands, classrooms and living rooms.”