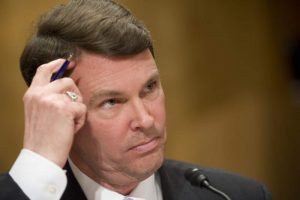 The decision is made at 6 pm each night for the following day to ensure they have the most up to date and useful information on the next day’s weather. Berry stated that the total productivity cost will be calculated when we are clear of the storm and published on the OPM website.

For some federal agencies, there is a requirement that you must have worked there for at least one year before you can telecommute. Berry made clear that this is not an OPM requirement, and hopes that after Blizzard 2010 agencies will realize the value in allowing telecommuting.

Many wonder who actually makes the final call? It is not a quick decision made by a small group of people. Berry pointed out that it is a conference call with over 100 experts including the National Weather Service, police, mass transit, bus services, all state and county governments, all transportation officials, and city officials. Then Berry discusses all of the most up-to-date information with his senior staff at OPM.

The two most important aspects in the decision of whether or not to close the government are 1) the employee and public safety and 2) maintaining the government’s operations to the maximum level possible. Contrary to some beliefs, President Obama is not part of the decision at all.

What was the biggest lesson from Blizzard 2010?  It is extremely important to increase the number of federal government employees utilizing telework. Hopefully each agency can sure this will happen in case we see another storm of this magnitude anytime in near future. However, going by historical records (with the last storm this size in 1898), that storm may not happen until 2122.